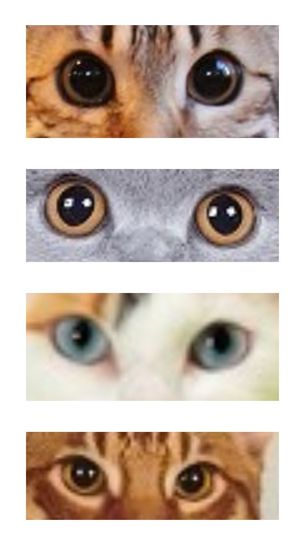 Bengal eye shape is a current hot topic due to the Bengal going through the process of becoming a championship breed in CFA.  The submitted standard was basically an old TICA standard with a few changes, but one thing that was left unchanged was the convoluted eye description.  CFA judges, rightfully so, are quick to point this out.

What is the problem with both the CFA and the TICA standard description of Bengal eyes?  They allow for three eye shapes - round, oval, and almond - none of which are an accurate description of the nocturnal, arboreal small wildcats' eye shape.

The problems with using either oval or almond as the shape for the Bengal eye is that it does not allow for an openness that is needed on a nocturnal eye.  It seems the one thing all Bengal standards agree upon is that the Bengal should have the look of a nocturnal cat.  One of the traits that clearly distinguish a nocturnal cat from diurnal or crepuscular cats is its eyes, so we ought to spend some time getting this description correct.

While oval and almond aren't right, round isn't exactly accurate either.  Of the three, it is likely the closest, but it would be the easy way out when formulating a standard - the description of the very best.  The Bengal has this interesting straight edge to the upper inner eyelid.  In addition, the widest point of the eye should have a slight bias toward the outer edge of the eye.  It is this slight bias that makes the eye look wild, not staring or domestic round. If you look down at the collage of four different tree-dwelling, nocturnal wildcat species, you'll notice that while their top eyelid shape varies, they all have the lower eyelid that deepens towards the outside of the eye, not directly in the center like a round eye.  When we are looking for ways to distinguish the Bengal from all other breeds and using the nocturnal wildcat for inspiration, it is important to note these slight distinctions in the standard. 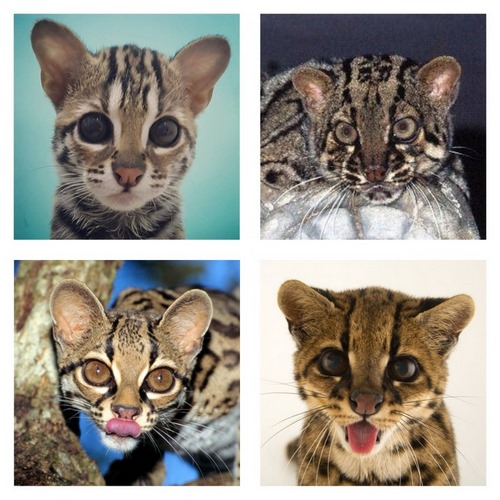 I reached out to a friend who is a judge and asked how one would describe the shape of the eye that I would like to see on the Bengal, and she pointed me to the American Curl standard for some ideas.  Bingo, I think they hit it - almost.

The American Curl describes their eye shape as "Walnut in shape; oval on the top and round on the bottom.  For the Bengal, I would add "with the deepest point slightly biased to the outer edge."  It seems that using a description that already exists and tweaking it to fit the Bengal would provide the most clarity for judges.

Another aspect that is often included in the description of an eye shape is the proportion of the eye to head size.  Look at the collage of four different tree-dwelling wildcats who are nocturnal hunters. Top left, Leopard cat; top right Marbled cat; bottom left, Margay; bottom right, Oncilla.  On all cats, the eyes are a dominating feature on the face as they should be on a Bengal as well.  So when describing the size, the Bengal eye should be moderately large in proportion to the head.  The allowance already made for jowls on male cats accommodates the difference in proportion between a male and female Bengal cat eye to head size proportion. 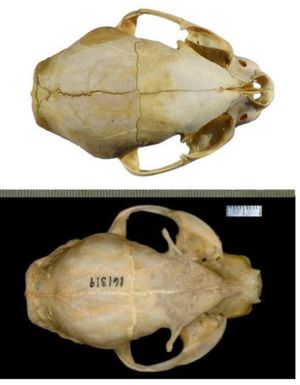 Standards need to account for the set of the eyes as well and this is where Bengal standards everywhere have an opportunity to clarify for breeders what a nocturnal set looks like.  It is obvious by looking at the wildcat collage that the eyes of nocturnal cats are set to the outside edges of the face with approximately one eye width between them.  Defining the width by the size of the eye would help Bengal breeders keep everything in the proper proportion.  There seems to be a common understanding that Bengal eyes should be wide apart, but the proportion of width to eye size is off on many Bengals with the width being too wide and the eyes being too small.  Clarifying the proportions could be an asset to kitten selection.  This would also allow for the eye description to help guide the head width to be in accordance to other areas of the standard - particularly where it calls for the head to be longer than it is wide and slightly small in proportion to the body.  It would be nice to start to see the different pieces of the standard working together instead of contradicting one another.

Often Bengal standards will call for the eye to not be bugged, which is understandable because no one should breed for structural flaws.  However, a nocturnal eye has a lot of surface area to its lens.  The difference between it and a bugged eye is that the non-bugged eye with a copious surface area is held strongly in place by prominent boning.  We've mentioned above that drop in the lower eye line towards the outside edge of the eye.  Look carefully below the lowest point in the lower eyelids on the pictures of the different wildcats, you can see the strength of the bone holding the eye in place so that it isn't bugged.  Now, look at the image of the dorsal view of two skulls.  The comparison between a domestic cat skull on the top and a Leopard cat skull beneath shows the difference in the bone structure around the eyes.  Notice the Leopard cat's zygomatic bone sticks out further in the front and sides and is a thicker bone than it is on the domestic cat.  Even the bones holding in the top of the eyes are longer and stronger on the Leopard cat. Selecting for the bone structure of a Leopard cat on the SBT Bengal will give the nocturnal eye that is coveted by Bengal breeders without the fear of the eye having the structural weaknesses of a bugged eye.  It is this strong bone structure that holds the eyes in a forward facing position. 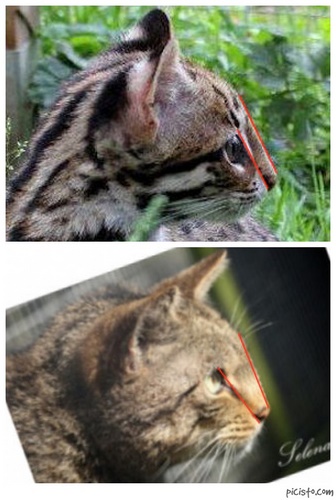 To have the nocturnal look, the Bengal eyes cannot be deeply set into the skull.  The nose bridge should not extend out beyond the eye lens very far.  This coincides with the need for a lot of surface area on the lens of the eye. A nocturnal eye must allow as much light to enter the eyeball as possible.  Furthermore, the bottom of the eye is set further out than it is on the majority of cats making the angle of the eye parallel to the bridge of the nose if the cat has the desired downward turned muzzle that is shown on the Leopard cat in the picture.  Even on cats who don't have the downward turned muzzle, the eye should sit ever so slightly tilted upward.  For all of this to exist, the Bengal needs the bone structure from the Leopard cat.  If standards start to describe with clarity what a nocturnal eye looks like, breeders will have to start selecting the stronger bone structure.  All choices have a domino effect, and this will have a positive domino effect.

The lens of the Bengal eye should be visible from all sorts of angles - that is what makes the eye nocturnal. In the picture below, look at how you can see the lens of this male Leopard cat's eye as it protrudes out from the face.  You can see the lens from behind the cat.  Notice, too, on the Bengal kitten how the lens is visible on the far-away side of the nose bridge.  Cats who hunt at night have to capture any of the minimal light they can and they have to be able to pick up light from all different angles.  If we are breeding the look of a nocturnal cat, we need to have a standard description that explains it as such.

It is time to get the description of the Bengal eye clarified by standards in order to help breeders make better selections towards the big picture goal of the Bengal breed which is to breed a domestic cat that emulates the look of a small, nocturnal, tree-dwelling wildcat.  To do so the eye shape, set, and size should be clearly stated.

Shape: Oval on the top, round on the bottom, with the deepest point slightly biased to the outside. Set: Placed on the outside of the face with one eye width in between, surrounded by prominent boning that holds the eyes at a parallel angle to the nose bridge in profile. Size: Moderately large with a large surface area on the lens.  Strong boning keeps eyes from being bugged.

So the question remains - are Bengal breed section members of any organization interested in clarifying their standard's eye description?

These Bengal eyes from around the world show that the ideal eye is attainable on SBT Bengals.  Pictured from left to right: Katzizi Ylvi at Katzizi Bengals in England; Fraser Valley Nova of Jewelspride at Jewelspride Bengals in Canada; Crestwood Vegas of Coppa at Coppa Bengals in the United States; Batifoleurs Moswen of Moulin Rouge at Moulin Rouge Bengals in France.