How the Forest Shaped the Bengal Ear 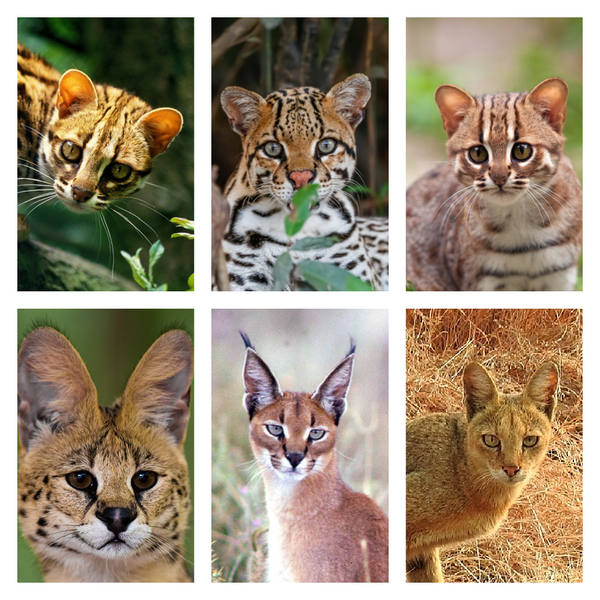 By comparing the tree-dwelling cats with the grassland cats, one immediately sees the difference between the ears - size and set. Except for the caracal, the shape is relatively uniform among the other five cats.

With shape being the unifying feature, let's consider why nature has shaped these ears in this manner. All these ears are deeply cupped. Except for the caracal, the rest are broad-based, uniform in width, and round at the top. This shape is designed to capture sounds from the widest angle and funnel the sound into the ear. The lynx tips on the caracal serve the same function as the wide round shape on the other five cats. They help funnel sound into the ear.

Because the deeply-cupped, broad-based, uniform-width, and round-topped ears are a standard and purposeful shape to wildcat ears, it should be the most critical aspect of the ears on breeds of cats that are meant to emulate the look of their ancestral heritage, including the Bengal.

While the ear shape of the collaged cats is something five of the six have in common, the ear set of the cats in the top row is quite different from those on the bottom. The grassland cats live and hunt on the ground. There are listening over tall grasses to try to identify the location of their next meal, which is why their tall ears are on the top of their heads and are upright in formation. 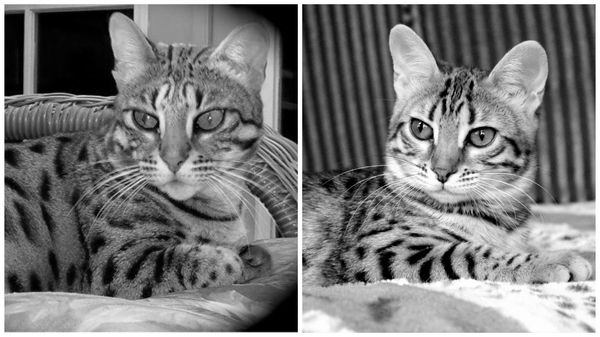 The small, tree-dwelling cats live and hunt in the trees. They must hear sounds from all directions. Because these cats live in trees, the lower set and forward tilt to the ears allow them to capture sounds from the sides and beneath the cat. In addition, the set and forwards tilt contour the ears with the body when the cat moves forward, preventing them from sticking out too far. High-set ears are more vulnerable to rips and tears from the branches of trees as the cat pounces on its prey. As we know from studying the survival-of-the-fittest theory, rips and tears in the ear would hinder the cat's ability to hear noises and reduce its survivability in the wild.   When the ears angle forward, rather than straight up, they look smaller than they genuinely are from both the front and the back view.

Bengal ears with the right shape will appear large on kittens which often means they are overlooked in breeder selection for being too large. In the black and white photo is an SBT kitten collaged next to the F1 from whom she descends. The ears appear too large on the kitten. However, to improve our ears, we must prioritize shape over size and let the ears develop. Kitten ears grow faster than the skull, so kitten ears will reach their adult size several months before the skull has stopped growing. Eventually, the proportion will improve if the shape and set are correct. Breeders sometimes say that their cat will grow into its ears, which is true when the ears are set correctly. If the ears are placed on the top of the head - as they are in the grassland wildcats in the first picture - then the cat does not "grow into" them.

Ear shape does not change as kittens become cats. Notice the kitten's development in the collage of the same cat at three different ages. The first picture is at seven weeks; the second is at five months; the third is at one year. The shape stays the same. The ear size doesn't change from the middle picture at five months old to the picture on the right taken at a year. It is the head that grows. 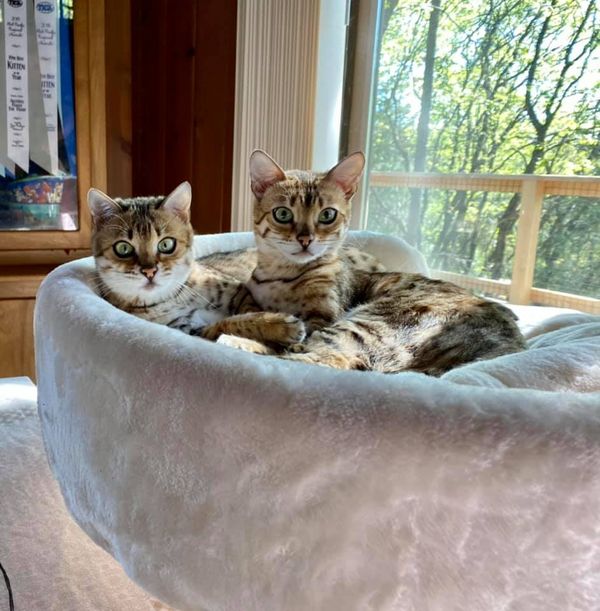 For many years, it has appeared as if the top priority of breeders is to achieve small ears. Small ears are not very wild looking when they are triangular.

Take a look at the half-sisters snuggled up in the cat bed. The cat on the left has small ears, but they are narrow and triangular. The cat on the right has much larger ears overall, but they are, in fact, a step closer to the wild look than the small ears on the left. The ears on the right are wide-based and more rounded at the top. While the ears are much larger on the cat on the right, they are actually a step closer to the wild look based on their shape. In most cases, however, breeders would say the cat on the left has better ears simply because the size is diminutive. If the cat on the right had more forward tilt to hear ears, they would "look" smaller. Forward tilt can actually hide several different weaknesses in the ear - including both size and shape. For those breeders who really feel they struggle with ears, trying to get forward tilt would make the time it takes to correct everything a more bearable process as the ears will "look" better than they actually are.

In addition to the forward tilt having an impact on the appearance of the size of the ear, where the ears sit on the head has an impact as well. The kitten collaged with the drawing has a fantastic shape, but the ears are too high on the head. If you move the ears down or add more top skulls, the same ears would "look" smaller. Now imagine not only moving the set down a tiny bit but also adding forward tilt; the ears would appear to be diminutive, even though their actual size would not change.

With the ears being a consistent struggle for breeders, it can be super exciting when you progress forward or see fantastic progress in other catteries. Recently a few cats with over-groomed ears have been doing the social media circuit and receiving a lot of praise. Micheal Turner permitted me to share pictures of his cat with one overgroomed ear. The mother of this cat overgroomed one ear at birth and left the other alone. Over-grooming can leave one with fantastic-looking ears when done on both sides, but when it is done on one side, it makes it much easier to identify.

When kittens are born, less than half of the ear flap is physically detached from the head. This is why newborn ears always look tiny. At this stage, there is very little active blood flow in the ear flap. Damage done to the ear flap at this time can easily go unnoticed due to lack of bleeding.

Between two and six weeks, the ear flaps fully open which is why ears often grow disproportionately during this time. If the ear is over-groomed early on, the unfused tip of the ear is removed. As the ear flap opens and grows, this stretches the area where the tip was removed which causes the ear to become rounded; in essence, as the ear gets larger, the scar tissue stretches and smooths down as either side of the growing ear is pulling it. This scar tissue is slightly less elastic and flexible than normal ear tissue. This means that any notches or uneven edges caused by the mother gradually smooth out as the scar tissue becomes tighter. Because of scar tissue, the point of removal does not have the fine hair edge you see on the natural rim of the ear. In addition, you will see an unnatural hairline surrounding this over-groomed ear.

Sometimes we see cats where this has happened, and our automatic assumption is that the breeder trimmed the ears because the shape looks so perfect. It is more likely that the mother overgroomed. This cat with one over-groomed ear and one natural ear demonstrates how this round shape results from the scar tissue being stretched as the ear grows; it is not because a breeder trimmed them to perfection equally on both sides.

It would be beneficial if those posting kittens and cats with over-groomed ears would add a disclaimer to their pictures stating they know the ear was over-groomed. Sometimes, the cat being published is a stunning cat worthy of compliments. Yet, the lack of clarity regarding the condition of the ears holds some back from complimenting the cat because they don't want to be seen as supporting this unnatural ear. When these pictures do not have a disclaimer, it causes confusion for new breeders who may not understand that the ears are not natural. How sad it would be for a new breeder to buy a breeding cat with over-groomed ears while under the impression that the cat would produce those ears. The only realistic hope of that happening would lie in purchasing a female who inherits the overgrooming behavior of the mother. It is not an authentic way to improve ears. 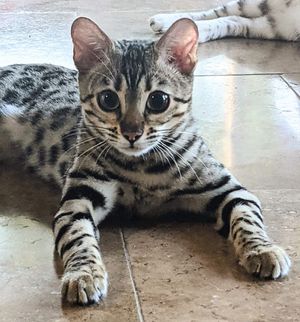 As breeders, sometimes we have to ask ourselves - what is the goal? Small? Or accurate? The Bengal will naturally go through phases in which the best ears do not appear small to get to the accurate ear. These cats will struggle in the show hall as the show hall, at the moment of publication, favors size over the shape and set. Most Bengal standards describe the size of the ears first. By having the size in the first place position in the description, it sends the message to judges that size is the most important aspect of the ear. Bengal breeders may consider discussing with their breed committees and breed chairs whether reorganizing the ear description could assist in the show hall, encouraging breeders to focus more on the shape and set and less on size. We need to get to the point where judges mention the shape of ears, such as these on Lots Of Spots Rayne Dancer; more often than not, they mention size.