Bengal Cats and the Law: Should I register my new Bengal Kitten? 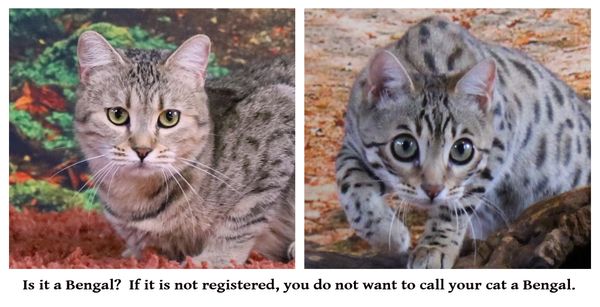 Many people want to rescue a cat. This is wonderful as it provides a home for a cat in need, but unfortunately, many people also want that cat to be a specific breed. Most rescue cats contain no pedigree breed in their lineage.  This is not a problem; the cat should be loved for the individual it is.

The desire for a rescue to be a breed may come from people’s experiences rescuing dogs.  Rescue dogs are typically composed of one or more recognizable dog breeds.  However, this is not the case for rescue cats.  Rescue cats are typically from feral populations or unfixed domestic cats.  To appeal to people’s desire for a breed, they are often labeled with a breed.  Longhairs are often labeled Maine Coons.  Colorpoints are called Siamese.  Blue cats are labeled Russian Blue.  And spotted or classic tabbies are, of course, labeled a Bengals.

In most cases, the labels are a harmless attempt to move the cat into a home faster.  But carrying the label of Bengal without having the registration papers to prove it can be devastating.

Not long ago, we received an email from a TICA judge asking if she could connect us with her vet. Her vet was trying to help a client move to Australia with a fifteen-year-old domestic shorthair mixed breed cat labeled a Bengal by their original vet over a decade before. The label of "Bengal" has become an unsolvable problem because it cannot be proven or disproven. Being a rescue cat of unknown origins, the cat does not have registration papers.

The couple moving to Australia is in a difficult position. Their tabby has been mislabeled a Bengal. Now that they need to move to a place where only certain Bengals are allowed, that label is a curse. The cat in question has borne the brand of Bengal its whole life simply because it has a spotted tabby pattern, but now the owner is searching for a way to get rid of that label. Unfortunately, there is no way to prove a negative. The DNA breed test one can purchase online is a farce. Out of desperation to get Australia to accept the cat, one was run on their domestic shorthair. But the test is not recognized by the Australian authority. No governing body recognizes it as a legitimate test.

The mixed-breed domestic shorthair tabby cat is left with no way to rid itself of the Bengal label. Non-pedigree cats should never be labeled a Bengal by rescues or by veterinarians.  And pedigreed Bengal cats should always be registered.

Why do laws differ on Bengal cats?

Sometimes the laws are the result of complete ignorance on the part of legislators. "Following an incident wherein someone had a tiger in their apartment, Bengals became heavily regulated within New York State and New York City" (Alessio). There is a big difference between having a Bengal Tiger in a New York apartment and having a Bengal cat. Nevertheless, people may not own a Bengal cat of any generation in any of New York City's five boroughs. 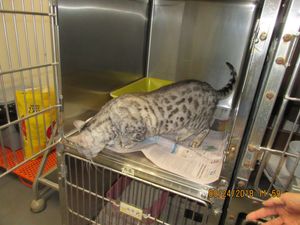 Some island locations are worried about Bengals getting out, naturalizing, and then destroying the natural habitat. In Hawaii, Bengal cats are not allowed because state officials are afraid "they threaten [the] native birds" ("Exotic"). However, Hawaii is ultra-sensitive regarding what they allow onto their island after their experience with the mongoose. The Hawaii Department of Agriculture photographed this silver cat as one of several Bengals denied entrance into the state of Hawaii.

Why do people want to redefine domestic animals? It makes them easier to abolish. According to PETA, in a perfect world, "all animals would be free from human interference and free to live their lives the way nature intended. . . as they were before humans domesticated them" ("Companion Animal"). The long-term agenda of animal rights activists is to end companion animal ownership.  They will slowly work away at this goal removing legal ownership of companion animals.

Ending ownership of exotic animals is relatively easy. Most people agree that tigers do not belong in a New York City apartment, so a law prohibiting exotic ownership passes through the legislative channels without much opposition. However, suppose the word "domestic" is redefined to exclude cats down from a species outcross. The word hybrid is redefined to include an infinite number of generations from the initial cross. In that case, the Animal Rights movement can more easily eliminate the right to own a cat with a species outcross in its lineage - such as what has happened in New York City. It is a game of semantics that allows extremists to inch closer to their goal. 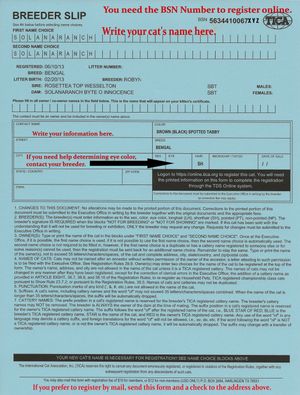 What can you do to protect yourself?

If you want a Bengal, buy a Bengal from a registered breeder who will supply you with registration papers. It costs the breeder less than $20 to register a litter of kittens. Complete the kitten's registration as soon as you have selected a name. You can complete the registration papers by mail or by the website - follow the directions on the form. Registering your cat provides legal proof that your cat is a Bengal. If required, a certified pedigree could be ordered to determine the number of generations away from the species outcross.

If you adopt a tabby cat, do not allow the rescue or a veterinarian to label that cat as a Bengal on any paperwork. Do not publicly (on Social Media) refer to your cat as a Bengal. This decision could haunt you in the future. Even if your cat looks undeniably Bengal, you do not ever want to refer to it as such if you do not have the registration papers to prove its generation from the species outcross. Otherwise, where you live may be determined by your cat's legality because the alternative means giving up your cat.

Protect your purebred Bengal by completing the registration papers.

*The link to this article is purposely left off as not associating with an organization that kills more animals than it helps.