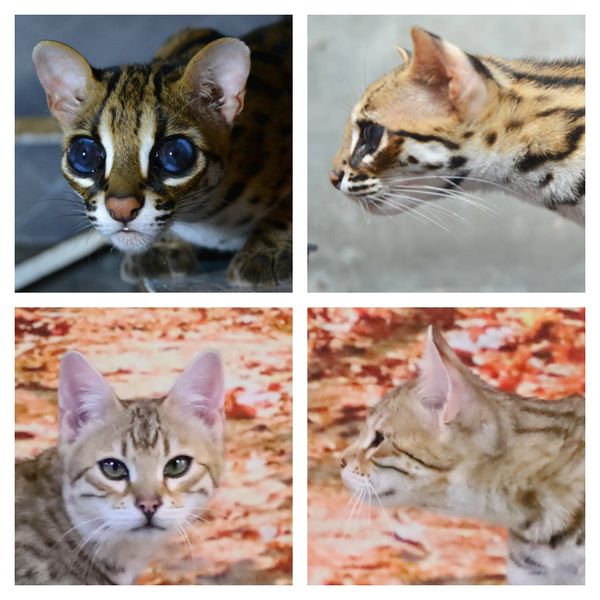 The Leopard cat relies on its ears.  Yes, those large nocturnal eyes do catch movement in the dark shadows of the night, but, often, before the movement has been spotted, a sound has been captured, directing the eyes to the source of the sound.  While your household cat never misses the opening of the refrigerator, the sound of the drawer that contains the can opener, or your "here, kitty, kitty" call at dinner time, the demand on the ears isn't quite the same as the sound of a mouse scurrying over a moss-covered tree branch. What gives the Leopard cat such sensitive hearing?  The cupping and forward tilt of its ears. 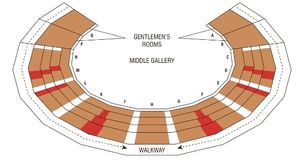 Look at the profile pictures of the cats pictured above. The Leopard cat's ear has much more depth, more ear flap than the other cat. This depth is the cupping of the ear.  Now, look at the face forward pictures of the cats.  By looking at the shadow on the inside of the Leopard cat's ear, one can see the interior is rounded like the seating in Shakespeare's Globe theater.  In contrast, the interior of the other cat's ear does not have much depth, and it isn't rounded inside.

Why is the interior of a Leopard cat's ear shaped like the seating in Shakespeare's Globe theater? They are both designed to amplify sound.  Of course, there were no microphones or speakers during Shakespeare's time, so his theater was constructed to allow the audience to capture as much sound as possible from the actor's voices despite the distance from the stage.  While a Shakespearean audience is simply needing to hear for entertainment, a Leopard cat needs to hear for its next meal.  Cats hear a higher range of frequency than humans and even most dogs.  This is especially important for a Leopard cat as many rodents make ultrasonic calls, which a Leopard cat's ears must hear to be a proficient hunter. 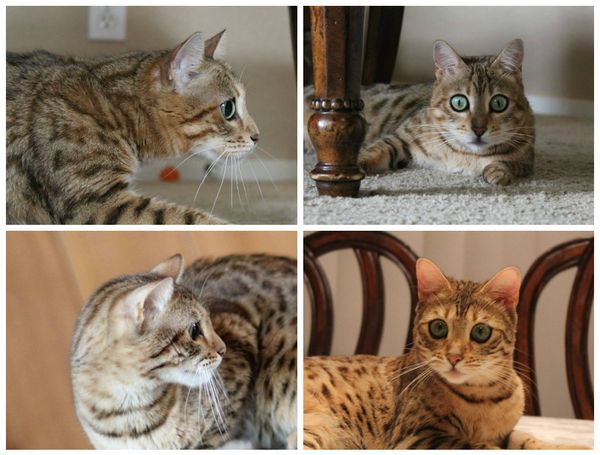 What do cupping and a forward tilt look like on a Bengal?  Pictured on the left is a mother and daughter with a similar ear set, shape, and size, yet the bottom cat has better cupping and forward tilt than the top cat. Notice in both cats' profile view, there is very little depth to the ear on the cat on top.  This demonstrates her lack of cupping. Looking straight into the ears on the front view, her ears do not have much depth within them. There isn't any space for theater seating. They look flatter from the front - almost two dimensional. In contrast, when you look inside the bottom cat's ears, you can almost picture the seating of the Globe Theater within them as one can see the curved inner surface. Furthermore, one can see in the front view that the bottom cat's ears tilt slightly forward.  Best of all is that the daughter is the bottom cat with the better cupping and forward tilt, demonstrating that these Leopard cat traits can be improved in one generation. 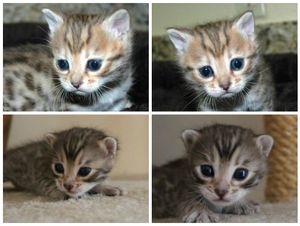 The collage on the right contains the same two cats pictured above but at three weeks old.  One can see that the mother, on the top row, has ears that point upwards, and the daughter, on the bottom row, has ears that tilt forward.  At three weeks, the ear flap has not completely opened up inside, so the degree of cupping is not yet evident at that age, but it doesn't take long for that to happen.  Recheck the kittens at five to six weeks. The three-dimensional cupping should start to be evident by six weeks, and you'll discover whether or not you've got room to seat a tiny Shakespearean audience inside.

These Blogs are written by Robyn Paterson, with much of the content coming from the mind of Jon Paterson.  We intend to help other Bengal breeders notice and select for features that are distinct to small forest-dwelling wildcats to better the breed together. They are best viewed on a desktop.