The pattern is a pretty important part of the Bengal breed.  The Bengal breed is most notably known for its large two-toned spots called rosettes. But a rosette, in and of itself, is not a pattern. Patterns are how the different markings on the cat are positioned or aligned. The Bengal cat has some interesting and unique features in its patterns beyond the marking of a rosette.

Bengals have tabby coats - which means that they have tabby markings.  What exactly are tabby markings?  There are four different types of Tabby body patterns which are clearly displayed in the diagram from Silver Shorthairs: classic, mackerel, spotted and ticked.  Bengals come in both the classic and spotted varieties. The ticked tabby pattern masks most of the traditional tabby patterns, but some breeds, such as the Singapura, prefer to see evidence of a pattern on parts of their ticked coat. 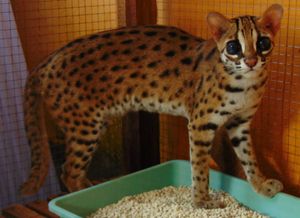 What exactly are these traditional, domestic tabby patterns?  On the classic, the mackerel, and the spotted, one will see that all cats have striped legs, ringed tails, and, while not visible on this diagram, a tabby M on their forehead.

While the Bengal displays a form of tabby and it does have these markings, the goal of the breed is to select for traits that differ from all other breeds and are similar to the small, tree-dwelling wildcats.  These small wildcats do not have any of these markings.  Their legs are spotted; their tails are spotted, and they have straight tram lines instead of a tabby M.  The Bengal breed has many cats who are breaking these tabby markings which is a huge step forward in regards to the pattern because it is not easy.  Whether judging a cat in the show hall or simply assessing a Bengal as a beautiful pet, when these traditional domestic tabby patterns are broken, it adds to the look that distinguishes Bengals from all other breeds of domestic cats. 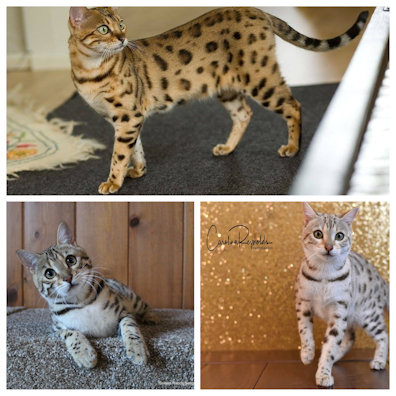 The Legs and Feet

Tabby cats have beautiful striping around their legs.  Leopard cats have spots.  When you see Bengals with more spots on their legs than stripes, that Bengal is breaking the domestic tabby pattern. Back leg stripes seem to be a bit easier to break than front legs.  Look at the back legs first and see if there are spots going down the legs.  Front legs are harder - especially from the chest down to the wrist. Finally, check the toes.  Getting spots all the way down to the toes is an exciting accomplishment for any Bengal breeder.  At this point in breed development, having spotted legs is becoming more and more common.  Of the pattern elements discussed in this article, it is the pattern breeders are accomplishing with the most consistency.  It isn't too hard to find a Bengal with spotted back legs.  Looking to the future, the density of spots in both number and pigment will be exciting factors to consider.

In the top left picture, Alcarinqua Felicitas shows the consistency of spotted back AND front legs is a reality. In the bottom right Solana Ranch What the Deuce shows off his spotted feet, and his daughter CH Solana Ranch Juliet of Primal Bengals breaks up the front legs striping into spots. 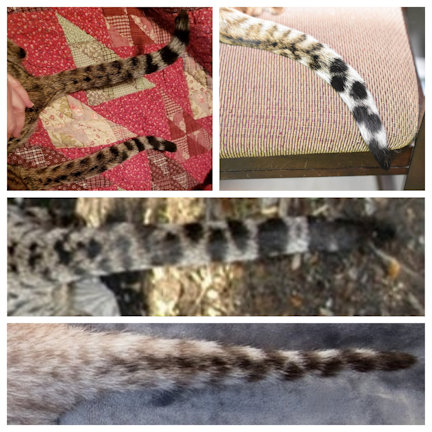 Tabby cats have ringed tails; Leopard cats have spotted tails with some having a few rings towards the tip of the tail.  When you see Bengals whose tails are breaking apart those rings, you have Bengals that are breaking the domestic tabby pattern.  Be careful not to confuse this with rosetting the tabby pattern.  When the tail ring has two color tones to it, then the breeder has rosetted the domestic tabby pattern, but that tabby pattern is still there.  The first step in breaking the tabby tail is to get a checkerboard pattern.  On a checkerboard patterned tail, the rings are broken and the pattern is staggered from one side to the other.  They still touch in the middle and they aren't quite spotted yet, but this shows the beginning phase of pulling the rings apart and forming spots.

Some tails are actually displaying markings that are in the shape of spots instead of rings; this is huge.  It is better than a checkboard pattern.  To get to this point, the breeder not only has to break the tabby pattern but also has to produce a thick enough tail for the spots to display.  If the tail is too thin, the spots merge back together into rings.  Getting a tail that has spot shaped markings on it is a double win.

In the tail collage, we see tails who are breaking the tabby pattern. Top left are Cheetahsden Catkins Journey and Bangles Spider; Top right is QGC Fraservalley Vega of Jewelspride; Middle is CH Cheetahsden I'm So Catkins; Bottom is Cositoes Captain Casper. 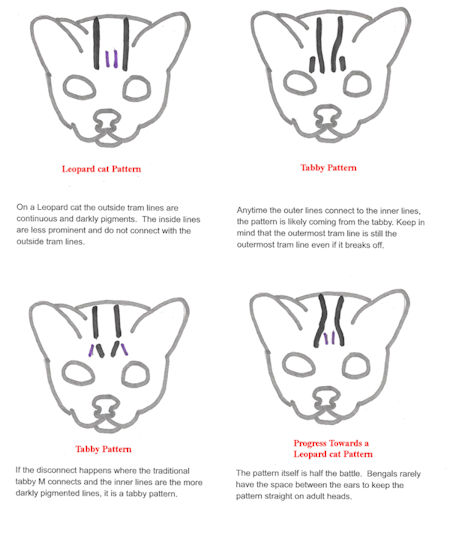 So often I will read on the Bengal chat boards that if the cat doesn't have an M on its forehead, it's not a Bengal.  The wrongness of that makes me cringe. Tabbys have forehead markings that make an M.  Leopard cats have straight tram lines - with the outer tram lines being the darkest. This pattern is extremely difficult to break because not only does one have to get the pattern correct, but one must also produce a cat with enough forehead and top skull along with the correct ear set to get the pattern to display correctly.  That is really hard - which is why you rarely see Bengals with a true Leopard cat tram line pattern, but when you do see it, you want to jump for joy.  O’Maley des Griffes de Feu, pictured below, has a disconnected Tabby M because the inner markings that would form the inner V of the M do not touch the outer tram lines.

Another problem with this pattern is a lack of a clear understanding of the Leopard cat tram lines.  One really has to understand that on the Leopard cat the outside lines are solid, dark in pigment and do not break.  Tabby markings will often come down towards the eyes, then turn inward and the darkest pigmented line becomes the inner V of the M.  The other lines can practically disappear.  This makes some people think they have broken the tabby M, but that is not the case.  To be a Leopard cat pattern, not a domestic tabby pattern, the outside tram lines must be solid, unbroken, and go straight down to just above the eye - they cannot veer inward in the final quarter inch of their trail. 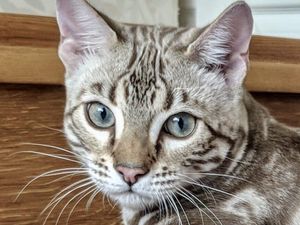